X
Back to the top

Valen Trio consists of John Ehde (cello), Einar Røttingen (piano) and Ricardo Odriozola (violin). Founded in 2009, the trio took its name after the Norwegian composer Fartein Valen. In addition to performing trios from the standard repertoire, Valen Trio actively commissions new trios and explores repertoire from the 19th and 20th Centuries that deserve to be better known. This profile is reflected in Valen Trio’s first CD release on LAWO with trios by Fartein Valen, Klaus Egge and Ketil Hvoslef, the latter trio being specially written for Valen Trio. The CD has received great critical acclaim; Klassisk musikkmagasin writes “ An absolutely outstanding CD and one of the best of its kind that I have heard in a very long time” and Stavanger Aftenblad continues “This release sets a new standard for one of the most important works in Valen’s production…an outstanding release of Norwegian chamber music!”. Gramophone and Fanfare write respectively  «The players’ ensemble and intonation are flawless and their understanding of each other and the repertoire highly impressive” and “they play Valen’s  rhythmic, energetic music with love and great attention to detail and with the stylistic knowledge that comes from a serious study of the composer and knowledge of the culture in which he worked”. In 2013 Valen Trio did the first performance of Knut Vaage’s “In Movement” at the Bergen International Festival and in 2015 they toured Norway and Denmark with trios by Bohuslav Martinu, Antonin Dvorak and Edvard Grieg. 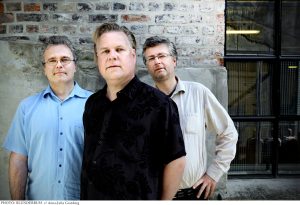